(Seventh in a series of articles on reaching out to city kids.) 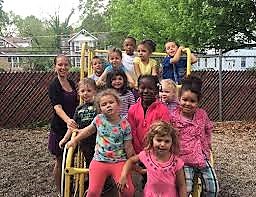 I have so many good memories of taking my kids to pre-school. They attended 3Cs Nursery School, a Christian cooperative at College Hill Presbyterian Church that focuses on building a supportive environment for families.

I was often scheduled to work at the same time as a young dad, a big, muscled African American guy who looked terribly uncomfortable on the tiny classroom chairs, his knees up to his ears. My son loved him.

He was a kid who hated crafts and wanted to play with blocks. The kids were supposed to finish their ‘small motor activity’ before they were allowed free play. This dad would  only require the bare minimum before he cut him loose. “Me and Daniel, we got an understanding,” he said, winking at Daniel as he hastily scribbled a picture and took off.

Several good things are happening at once at a cooperative pre-school. Children are learning from the teacher and from socializing with others. The parents are helping the teachers so kids get more attention.  The parents are probably learning most of all – both from the gentle, patient teachers, and from watching how their kids interact with others. They’re also saving money because cooperatives require less paid staff. In addition, they are forming relationships with other parents and grandparents who have kids the same age.

Even though I didn’t always feel like dealing with a bunch of three or four year olds, it was very good for me to do so. I learned what was developmentally appropriate for my kids at that age – especially helpful with my first child. I observed that he was way ahead of kids in some areas, lagging in others, and I adjusted how I worked with him accordingly.

I also saw how he related with other kids. At one point he was under the influence of a child with a strong personality, and was getting into trouble under that kid’s direction. I may not have picked up on what was going on if I were not there. Because I was there, I could coach him on how to say no or switch activities to break the pattern.

Not everyone in our neighborhood can afford to pay for pre-school, so 3Cs  has several fundraisers to raise scholarship money. Staff and volunteers run a resale store for children’s clothing and toys, Sonshine House.  They also host Gingerbread Shoppe, an enormous craft show that fills every corner of the church and raises around $8,000.

3C’s current director, Shannon Caton, has worked hard to make the preschool accessible to everyone.  The seventy children now attending are racially and economically diverse.

“It’s been challenging to reach beyond the middle and upper classes to make it a place where everyone can benefit, but that’s what we need to be doing.”

She said about half the families are receiving some amount of scholarship money, or working extra time beyond their coop commitment. Some families may only be paying $5 a month, but she has found that it is important to require people to contribute something.

Another way the program has changed to accommodate families with single parents or two working parents is to reduce the coop commitment to once a month, and offer a four-hour preschool as well as the former two and a half hours.

“That gives part time workers time to work a whole morning, and gives grandparents who are taking care of grandchildren more time to rest,” Shannon said.

3Cs has been part of our community since 1968, and because it has adapted to meet the needs of our neighborhood, it will probably remain for years to come.