(Fifth in a series on taking steps away from depression.)

I used to think of depression and anxiety as two unrelated problems.

But I realized, at some point, that depression often followed a time of anxiety. Then I made the connection that anxiety often set in as I was emerging from a time of depression.

Since then, I’ve been trying to figure out whether they just take turns, depending on what’s going on in your life, or if they actually trigger one another.

There is a Connection

I’m convinced, at least in my own case, that anxiety wears me down to depression. When many tasks of life are seen as a big hurdle, triggering shortness of breath, a sense of dread, a feeling of incompetence, a fear of rejection, trouble focusing – that drains me to a point where I feel so down I want to quit stuff.

One study described in the Journal of Anxiety Disorders states that anxiety and depression are often highly correlated with each other, and that depression can follow anxiety years later. People with lifetime anxiety had lifetime depression 73 per cent of the time, and people with both had worse illness and functioning than those with only one.

This article also pointed out that past depression predicts future avoidance, and avoidance predicts anxiety. A huge study of over 6000 adolescents over 14 years demonstrated that avoidance behaviors occurred in between times of anxiety and depression a significant percentage of the time.

On the other hand, if I went to the party, chances are I would have some positive experiences there in addition to all the awkwardness, and I would feel prouder of myself afterwards.

I would probably also learn a few things, whether or not I was aware of it, that would make me a little more hip to how I should behave at a party, which would make the next experience less scary.

Conquer a Little at a Time

So it goes. If we can gradually expose ourselves to what makes us anxious, our window of fear gets smaller.

I used to be terrified of getting onstage and saying or doing any little thing. Now I’m only scared if I’m performing at a big convention with video screens. The setting is usually a lot smaller than that, so having succeeded at the convention, I no longer dread a crowd of 200.

That’s how we anxious types need to march through life. The worse thing that happens is that we aim too high and we fail at something. So we learn, and we take our challenges in smaller chunks.

And when depression starts to take us down, we don’t avoid that reality either. We take care of ourselves and get as much help as we need, so the downward spiral changes direction.

It seems that often our greatest anxieties are attached to our giftedness. It’s so frustrating to see a marvellous athlete quit just because she failed in one competition. Or a wonderful musician stop playing because his performance anxiety wore him down to exhaustion.

Please don’t give up on yourself. Don’t let yourself get too busy, or make yourself a slave to others’ expectations, but don’t quit either.

Then you can get off the anxiety/depression seesaw and just focus on one thing at a time.

It’s so rewarding to get to a place where you can function in your strengths, and even get a handle on a few weaknesses, only to discover that they no longer stress you out.

(Eighth in a series on working from home.) 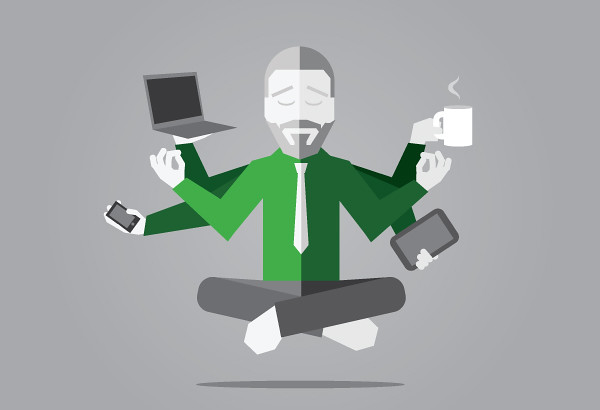 So, am I a loser if I can’t take in a lecture, text a friend, and check my email all at the same time? Everyone else seems to be doing that.

I’ve always had an instinctive sense that when I try to do more than one thing, concentration falters and I suffer an angsty discomfort with no good result.

Turns out that communication research is in my  court, and it has been established since the middle of the 20th century that divided attention leads to compromised  retention. A Cornell study repeatedly demonstrated  that students who browsed on their laptops during lectures performed worse on tests than their classmates who kept them closed. (Hembrooke &Gay, 2003)

Apparently, we’re not actually capable of focusing on more than one  thing at a time, and energy is lost in the effort of the switch.

I often suspect that I am on the receiving end of multitasking innefficiency.  I’ll get emails in which only one of my two questions is addressed, even though I wrote “2 Questions” on the subject line, and numbered the questions in bold.

Or someone on the phone takes about two seconds too long to reply. You can just see them peeling their eyes off some screen long enough to formulate a minimal answer. I often get the sense that people are half-listening or skim-reading.

Worst of all is to be in the sole company of someone who is so into their phone that you don’t feel fully visible to them – like one of those holograms on the Disney Haunted House ride. Many of us who work at home are in danger of preferring the company of an operating system to those pesky flesh-and-blood humans, who are so much harder to control.

My guess is that these last few decades will go down in history as the age of social geekiness, before norms were established around the use of technology that kept people from living on desert islands of screen addiction.

“Remember how dad used to check his phone as soon as it pinged, even when he was reading us a story?” a scarred 30-something  will ask his sister.

“Yeah, and mom never actually saw us kick a goal, ’cause she was always texting,” she’ll reply, and  they’ll shake their heads at the bad old days.

Before that day, there will be nation-wide 12-step tech-addiction meetings. People will stand and announce, “Hi, I’m (Aiden/Emma/Liam) and I’m a techaholic, and my life has become unmanageable.” Everyone will put their devices in the middle of a circle, and will courageously endure the agony of separation in an odd but comforting environment of human support.

To avoid all that, it helps to plan our work in blocks, where we decide ahead of time to stay focused on one  thing. Julie Morgenstern, who wrote, “Time Management from the  Inside Out,” advises that we build screen breaks into our schedules, starting the day with one at least an hour long, where we’re free to do deeper, focused work before getting distracted.

That sounds like a good beginning towards living in such a way that we value people more than things, and work from an intentional center rather than a reactionary swatting at interruptions all day long.

Maybe when we look up from our screens every so often to rest our eyes, we should also take a few deep breaths, and ask ourselves, “Am I paying attention to who and what matters most?”