This is the last section of the short story, “Kyle Helps Santa”, from “Christmas on Pleasant Hill.” This is one of 12 stories in the book, available from Amazon. To read “Kyle Helps Santa” from the beginning, click here.

When Christmas Eve arrived, Kyle’s excitement about delivering presents to Andre turned into fear. He had a plan. He had a clear description of which house Andre lived 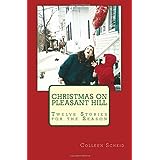 in; one from the corner with the nasty couch on the porch. But the obstacles that had seemed like no big deal loomed enormous that night, when Kyle climbed into bed. He knew he needed to wake up before it was light outside. He didn’t want to deliver the gifts in the middle of the night though, because he didn’t want them stolen. He was going to knock on the door, hide and wait for someone to come and take the bag inside.

He had asked his dad when it would get light on Christmas morning and his dad had said, “Don’t worry about that, buddy. You’re not going to get us till it’s eight o’clock, no matter how long it’s been light.”

Kyle googled, “When does it get light?” and the sun calculator told him seven fifty-two. That was too late. People would be up and around by then. He set his phone alarm for 6:30 am.

When the alarm went off, Kyle turned it off as quickly as he could. He put on boots and a coat over his pajamas. He picked up the bag, which he could barely carry, and walked out to the stairs. The boards of the old house creaked alarmingly. His parents wouldn’t notice at first, thinking he was going to the bathroom, but he knew if he took the stairs they might get up and tell him to go back to bed. So he wound the top of his bag around his wrist twice, and, wincing at the weight of it, held it over the stairway railing, letting the thick wood rail take most of his weight. He carefully moved sideways down the stairs, holding the bottom of the bag with one arm and keeping most of his weight off his feet. It worked. The creaks could barely be heard as he slid himself down the railing. He hauled the bag to the back door, and slipped outside, closing the door softly behind him.

Outside, the ground was covered with snow, and the cold of the air made him gasp. As quickly as he could, he moved to the place at the back fence that was easiest to climb. It loomed high in the darkness, and he realized he had no plan for how to get such a heavy bag over it.

He couldn’t risk dropping a game system. It took all his strength to get the bag to the top, but the fence was smooth on the other side and if he tried to slide, the weight of the bag would make him fall. A car passed by, its headlights flashing through the trees. Kyle froze, afraid the world was waking up and he was running out of time. Tears of frustration clouded his vision. He couldn’t slide and he couldn’t risk dropping the bag. Then he thought of lowering it with a rope. He had a rope in his tree house.

It was excruciating to haul the bag back over the top of the fence, slowly climb back down and run to the tree house. Adrenaline zinged through his arms and chest as he ran through the snow, aware that he could be seen from his parents’ bedroom window. He felt an intense urge to pee, but ignored it. He grabbed the rope, glad he had untied it from the tree last week when he was pretending to be a cowboy. He looped it three times around the bag, double knotted it and went through the whole painful climb again, carefully lowering the bag to the ground on the other side.

He was glad to find that the tied-up bag was a little easier to carry. He stomped through the snow as fast as he could, through the neighbors’ side yard to the street. He paused at the curb. He had never crossed the street alone before. Looking both ways twice, he breathed deeply and trudged across. He felt like a runaway who was leaving home for good.

As he faced the empty street ahead, his heart thumped hard. He had never been out alone, and it was dark. Passing the park out in the open he felt exposed, with the lights of a retirement home illuminating him. But it was worse when he cleared the park and had to walk past small, dark houses. He was afraid of someone looming behind every tree and car, ready to grab him.

When a car came down the street, he crouched behind a parked car, shaking with fear. It was going so slowly, he was sure it must be his dad, looking for him. Slowly it passed and crawled around a corner, leaving him in the dark again.  Staying still had rooted Kyle in his fear. He had an urge to drop the bag and run home. He slowly rose and looked ahead. The end of the street was only four houses away. He was almost there.

He found the right house, the couch on the porch lit by a street lamp. He climbed up onto the rickety porch, carefully set the bag down just to the left of the door. He looked for a door bell but there was none.  He would have to knock. He looked around for a hiding place, settled for a car parked nearby on the street, closed his eyes and thumped hard three times. He tore down the stairs, slipped on the second last one and fell. He scrambled up and dashed to the car. He hid behind it, terrified that another car would come down the street and spot him.

It seemed as though minutes passed. He wondered if he should go knock again. He waited for another car to crawl down the street, crouching down near the parked car’s headlights to stay hidden, hoping the driver didn’t look in the rear view mirror. He decided to go knock again. This time he pounded as loudly as he could, seven times, then closed the top of the bag into the screen so it could not be missed.

Right away a light came on behind the door. Kyle ran to the edge of the porch and threw himself over the railing and down into a bush, crouching lower than the porch just as the door opened. It was not Andre. It was a woman, thin and small in a big t shirt. She put her head out of the screen door, then touched the bag with her leg and looked down. She untied the rope and opened it. She opened it wide, to the light from the street, and examined the contents, bending over.

Kyle could see her through the bush, where he crouched frozen, afraid to breathe. The woman looked around. Then she stood up and leaned on the door frame. Kyle had a sinking fear that she would go back inside and leave the bag, but she just stood there. She looked up towards the street lamp, or maybe the sky. She put her hand to her throat and stayed there with the door open to the cold night, still as a statue. Finally her hand moved up to her face. She wiped under her eyes, she bent and picked up the bag, and she went inside.

Kyle stayed crouched in the bush for a minute or so, a smile spreading over his face. Then he ran across the little yard and up the street, barely aware of scratches on his hand and face from the bush, or the ache where he had fallen on his right knee. He ran, fearless and joyful, all the way up the street. As he reached his house, the joy persisted. Now he didn’t even care if he got caught.

He couldn’t climb the fence where he had escaped. He had to go all the way back to the place at the rear of the property where he and Andre came back from the woods. A tree trunk by the fence gave him height to reach the top and he swung himself over as smoothly as Andre had ever done it. As he neared the back porch, he saw his dad looking out the window.

His dad opened the door and stood there as Kyle made his way up the snowy steps. “What are you doing outside before seven in the morning on Christmas?”

“Well you said not to wake you up till eight.”

His father touched the scratch on his face. “What were you doing out there?”

Kyle wiped some blood from the scratch on his hand, looked up at his father and said, “Nothin. I was just helping Santa.”