We don’t have long to raise our kids. In my experience, most of my actual hours with my kids were before they were ten or eleven. They are increasingly out in the world and involved in after- school activities as they get older. So it makes sense to decide what’s important to do with our kids, and what to teach them, as early in their lives as possible. 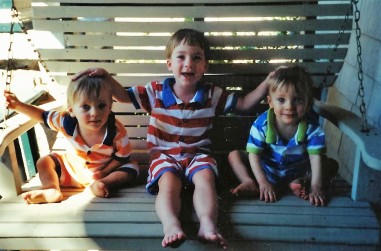 I’m so grateful now for every hour I had with them. I don’t regret not earning more money, I do regret the times my own anxieties and preoccupations kept me from being more in-the-moment with them, more playful. I don’t regret putting my career on the back burner, I do regret sometimes being so task-oriented at home that I didn’t take more time to be alone with each child.

This series of ten posts on what I’m glad we did for them has only scratched the surface, but I hope the posts can help parents think through what matters and how they want to work that into their family life. It’s good to ask ourselves questions like:

It’s such a joy to see our grown kids thrive, such a heartbreak when they don’t.  I know people who were very intentional about how they raised their kids, yet their children are not doing well, not thriving or happy.

Parents can’t take the whole rap for that. There are aspects of our culture that are hostile to family life, and our kids make their own choices. There aren’t any guarantees in this parenting business. But keeping the end in mind – that time when they leave home for good – can help us make the most of each precious day.

Have you ever noticed how often the kids are smarter than the adults in many comedies? I get that it’s a humorous device – reversal– but on many shows, it’s the norm. With monotonous regularity, clueless parents are outwitted and talked down to by their precocious, mouthy kids.

I find this beyond annoying because this barrage of parental ineptitude undermines respect.

Kids need to respect their parents to develop to maturity without a string of developmental hitches too numerous to count. It’s terrifying for a child to constantly feel smarter than his parents, to have no one to look up to or receive limits from.

I’m not saying we need to be smarter than our kids in all areas of life – my kids have been more tech savvy than me for years. I’m talking about respect. Kids are emotionally, spiritually and physically safer when they have parents who are morally worthy of respect and willing to maintain authority.

I’m glad that for most of the time at least, my husband and I were the grownups in our family. I recall one of my boys, in middle school at the time, saying, “You and Dad aren’t as cool as some parents. If I get sarcastic and joke around you won’t put up with it.” I considered that a good sign that we were holding our own.

Of course we’re not going to get respect if we’re not living respectable lives. But there’s more to it than that. I think maintaining our children’s respect includes:

It can be exhausting to be the grown up, but it is so important for our kids’ development, and our own self-respect, that it is well worth the effort.