Creativity looks like chaos before you see anything worthwhile. Anything from a cake to a newly paved road involves muck, mess, noise and displacement. I think if we want creative kids, we have to let them mess stuff up.

As soon as our twins had learned to walk, they would climb out of their cribs, slither down the stairs on hands, knees and bellies, and toddle into the dining room, where they would purposefully tip over two or three chairs and each dump out a basket of toys. They would survey their work with satisfied expressions, as though they had righted many wrongs.

I had an instinct not to correct them. They were too proud of the accomplishment. I’d let them play in the derbris and picked it up when they had moved on. They eventually grew out of it.

Some of my best memories, the times of most intense joy, took place in a heck of a mess. One time we had another family over, and while the adults grabbed a few minutes of conversation around the table, the kids filled the living room, entry and half the dining room with about 20 of those three-foot nylon pop-up cubes, gifts from a doting grandma.

An old friend from my single days happened to be campaigning for an election in the neighborhood. When I opened the door to his knock, his jaw dropped at the sight of the wall to wall pop-up cubes and the hoard of swarming kids slithering through them. He backed out of the doorway, at a loss for words.

That was nothing. When my nephews came over, I would let them turn my living room into a fort. Furniture would be rearranged and upended, cushions piled high and beds stripped to make roofs and walls out of the blankets. Anyone who entered was caught in the crossfire of countless nerf gun darts. The passion and joy of the battle warranted the inconvenience, and they were so grateful for the freedom that the kids did a pretty good job of cleaning up.

Probably the tackiest thing we ever allowed was an old mattress in the middle of the boys’ bedroom, for three years. My husband put it in their room when we bought a new one for our bed, so our three little boys could have fun ‘for a few days’. They had so much fun, leaping from their beds onto it, rolling around wrestling in its softness, doing flips – we couldn’t bring ourselves to get rid of it until they needed bigger beds.

I could go on and on. The loft of our old barn in the backyard was turned into a bunker, the lower area into a work-out space complete with punching bag suspended from the rafters. The backyard is dominated by a trampoline, the basement by an arsenal of nerf guns, the attic by enough Legos to build a small nation.

I think kids who are given territory upon which to make their mark become confident, creative adults. They can take risks and imagine new realities. They can tolerate the disarray of change. Our house may never be featured in “Better Homes and Gardens”, but I’m still glad we let our kids make messes.

Anyone who has raised kids can quickly think of the things we wish we had done differently. That can be instructive to younger parents, but what I think is more helpful is to hear what people think they did right. In the next 10 posts, I’ll have a shot at that – what I’m glad we did for our three boys, Daniel, Joshua and Ian, now that they’re all officially adults. (Sort of.) To start with, some thoughts on the location of it all:

Our three-gabled Victorian house was built in 1880, long before this was an urban neighborhood troubled with drug dealers and break-ins. I fell in love with the carved staircase, tiled fireplace and grand old trees.

But by middle class standards it’s small; a fifteen foot square living room, the same sized dining room, a smaller kitchen, three bedrooms. There’s no finished basement with giant-screen TV and sectional couch like our friends in the suburbs have. No second living space, no mudroom. I have dreams of discovering hidden storage closets.

It’s not an investment to have a home in a struggling city neighborhood; we’ve poured money into the place but it’s not worth much more than we paid for it.

Nevertheless, I’m glad we stayed here. We chose it twenty years ago because we wanted the diversity of city life, a short drive downtown for my husband, proximity to our church, and a mortgage that would not require two large salaries. If we had followed the normal pattern of young professionals, we would have moved when we had kids – for more space, more safety, better schools.

For all these reasons, I think staying in a “starter” home is an option worth considering.

When it comes to being aware that God is right here with us, most of us are blocked. Like a guy with foggy glasses, like a girl who has the radio cranked too loud to hear her GPS, there are some simple things we need to do before we can perceive what is so close.

This is the last in a series of ten posts that discuss things we can do on our own to let God into our heads and hearts. Any contact with God is renewing. So, in summary, here’s what we can do to spiritually recharge:

There’s a balance between spending time alone with God and experiencing God in community. Each needs the other, each feeds the other. People who want to seek God benefit greatly from worship services, service projects, Bible classes, prayer groups, retreats with spiritual directors. These are the things we tend to think of first when considering practicing a faith.

But following Christ is much more than practicing a religion. It is a relationship with the one who made us, saved us and loves us every moment of our lives. God really wants time alone with us. And whether we want it or not, we really need time with God.

Whether it’s once a week hiking in a forest, or every morning sitting in an armchair for fifteen minutes, our spirits can be continually renewed, like a fountain that never stops flowing. All we have to do is give God time and permission to work in us.

Why is it that people can go through genuine conversion experiences and really believe in Jesus, yet still be jerks? It confounded me for years. I’ve seen selfish, cheap, bigoted, mean, even abusive Christians, make it much harder for those around them to have faith in God.

Gradually I’ve realized; the invitation to grow in knowledge and goodness is as unforced by God as the first invitation to come to faith. If we don’t do anything different to change what’s in our minds, our behavior won’t change either. 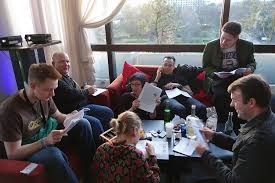 The way our minds get changed is by studying the Bible. Until we do this, we’re victims of the families and cultures we were raised in. The Bible is the playbook for being in God’s community, across all time and cultures. One verse in Romans, a letter in the New Testament, says, “Be transformed by the renewing of your mind.”

Mental transformation takes place when we’re exposed to new information, when we lay aside opinions to observe, analyze, question and act on it. A good process for Bible study allows all this to happen.

Here’s a suggested format, with much of the material based on appendices from “The Bible Study Handbook,” by Lindsay Olesberg:

A few things to keep in mind:

Some people find a little time to study every day, some take a chunk of time on the weekend, or even go on study retreats. You may not notice anything different at first, but a year or two of regular Bible study changes our lives in profound ways.